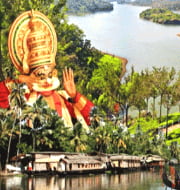 Earlier, the Kerala Tourism had won the ‘Ulysses’ Prize of the UNWTO for its contribution as a global leader to sustainable tourism.