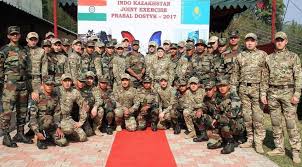 India, Kazakhstan joint army exercise KAZIND will be conducted between Indian and Kazakhstan Army in Otar region, Kazakhstan from 10 to 23 September 2018. This will be third joint military exercise between two countries which have history of extensive cooperation in defence arena. The second edition of the exercise was held in India in 2017.

The aim of the exercise is to build and promote bilateral army to army relations and exchange skills and experiences between armies of both countries. The exercise will also serve as platform for exchange of drills and procedures. It will also follow graduated continuum from orientation to full scale mock exercise win aim of achieving optimum integration among two armies through enhanced mutual comprehension of each other’s tactics, techniques and procedures. It will also set stage for greater defence cooperation and consequently manifest in stronger ties between two countries. Kazakhstan Army will also get vast knowledge from experience and expertise of Indian troops in counter insurgency operations.