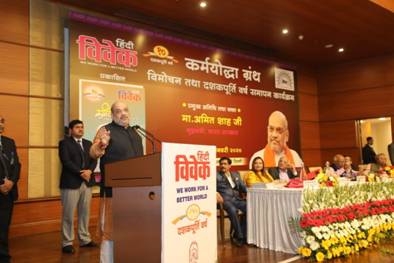 On Tuesday, 7th of January 2020 at New Delhi, India’s Union Minister of Home Affairs, Amit Shah launched a book named ‘Karmayoddha Granth’ on the life of India’s Prime Minister Narendra Modi. The Home Minister addressed the gathering at the launch and said that the qualities of a Karmayoddha such as a beautiful heart for people, a statesman, a hard taskmaster, an able administrator and an ideal leader who leads by example, are represented by Narendra Modi.

The Home Minister spoke about the curses of Indian Politics that Prime Minister removed after 2014 which includes appeasement politics, casteism, and nepotism & said that India has never seen a leader like Narendra Modi who takes strong decisions for the country without fearing the backlash. The Home Minister also added that India has turned up as a global power by taking strong decisions that include removal of Article 370, 35A in Jammu & Kashmir, bringing Citizenship Amendment Act 2019, resolution of Ram Mandir issue, illegalizing Triple Talaq, carrying out surgical strikes and Balakot airstrikes, which nobody thought of doing in last 70 years.