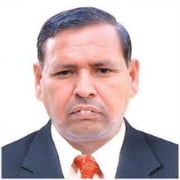 Jethabhai Patel the veteran cooperative leader and Sabar Dairy chief was unanimously elected as Chairman of the prestigious Gujarat Cooperative Milk Marketing Federation (GCMMF) that markets the Amul brand of dairy products in India and overseas.
Patel will head GCMMF Asia’s largest milk cooperative and apex marketing body comprising 17 dairy unions of the state for next two and a half years.
He was unanimously elected by chairmen of all 17 district dairy unions under GCMMF, who are also board members of GCMMF.
Patel has been chairman of Sabarkantha District Cooperative Milk Producers Union Ltd, Sabar Dairy, since 2010. He had been serving as GCMMF’s interim chairman following a no-confidence motion passed against former Chairman Vipul Chaudhary in 2013.

Note: More than 70% of the members are small or marginal farmers and landless labourers including a sizeable population of tribal folk and people belonging to the scheduled castes.

The Gujarat Land Grabbing (Prohibition) Act, 2020 recently came into force in the state of Gujarat. ...

The Gujarat forest department has transferred 12 leopards to a private rescue and Rehabilitation cen...