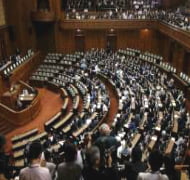 Japan’s parliament has passed two security laws to amend its pacifist constitution framed after WWII to allow its troops to fight abroad.
The bills already have been approved by Parliament’s lower house and it was voted into law by the Upper Chamber on 19 September 2015.
Key facts