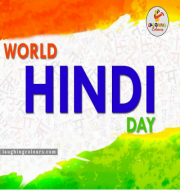 The World Hindi day is celebrated every year on January 10 in order to promote the language world-wide. It is celebrated by Indian Embassies that are located all over the world. The day is being celebrated world wide since 2006.

Hindi is the fifth largely spoken language in the world. It is spoken in Pakistan, Bangladesh, Nepal, UK, USA, New Zealand, Germany, Uganda, UAE, Guyana, Trinidad, Suriname, South Africa and Mauritius. The language is spoken by more than 43 core people in the world.

The Rabhasha Awards are presented to ministries, PSUs and nationalized banks.

September 14 was selected as National Hindi Day as it was the birth date of Beohar Rajendra Simha.

He was an Indian scholar, theologian, historian, sanskritist, Sarvodaya-activist, politician, journalist and Gandhian. Hindi was adopted the official language of India on his 50th birthday.

The word was transferred from the Sanskrit language “Sindhu”. The word “Sindhu” became “Hindu” after Iranians entered India.