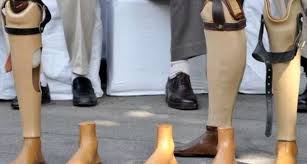 Republic of Korea (ROK) ambassador to India signed an agreement with BMVSS for providing assistance in prosthetic limbs sector.

The Korean ambassador emphasised that the agreement signed will open up access to Korean med-tech students to join various prosthetic fitment camps in various countries and participate in certificate programmes offered by Jaipur Foot.

The agreement will also open up many opportunities for overseas development assistance and grants from Government of ROK and donations from several private institutions and corporations from Korea to India.

BMVSS is the world’s largest organisation rehabilitating more than 1.78 million disabled. It is a pan-Indian organisation having over 23 branches across country.

It provides all its assistance, such as artificial limbs, calipers and many other aids/appliances with everything being totally free of charge.

It was registered as a society under Rajasthan Societies Registration Act on March 29, 1975 with its headquarters at Jaipur (India).

It is a lightweight and durable prosthetic limb/artificial limb.

Being inexpensive it is widely acceptable as prosthesis and has been widely used in India.