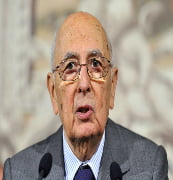 President of Italy: His role is mainly ceremonial but can declare legislation unconstitutional. He also has the power to dissolve parliament, nominate prime ministers and call early elections. He has tenure of 7 years.