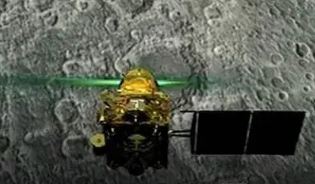 After the Vikram lander of the Chandrayaan-2 mission lost its communication link with the ground station, the Indian Space Research Organisation (ISRO) had started its efforts to restore the link. This has not been successful so far.

ISRO is yet to ascertain why the communication link was lost. Since the link was lost, when the lander was in flight, power failure in its communication unit can be a probable reason. The lander has hit the Moon’s surface at a speed far greater than needed for a safe landing. It could have resulted in partial or complete damage.

If the instrument is in working condition ISRO hopes to reconnect with the lander. Signals of specific frequencies, which the instruments on the Vikram lander are tuned to receive, are being sent in the hope that one instrument or the other would be able to receive them and respond.

The orbiter which is making many revolutions of the Moon every day will be trying to send signals to Vikram every time it crosses over it. It has the best chance to establish contact.

The main challenge is the position of the antenna on the lander. The antenna was supposed to be erect and free of any obstructions to scan a wide area to receive signals.

A vertical antenna would also be able to scan for signals from a similarly vast conical area. If the antenna is buried, pointing towards the ground, or is otherwise obstructed, its ability to receive signals would be diminished considerably. The conical area in which it can scan would also be reduced.

But why there is a deadline?

There is a deadline of two weeks (21st September) because the moon will enter into a lunar night after that. Hence even the lander and rover were supposed to be functional only for 14 days from the day of their touchdown.

Lunar days and nights are equivalent to 14 Earth days. The nights on the Moon would be very cold, especially in the south polar region where Vikram is lying. Temperatures can even drop to as low as -200°C. The instruments aboard the Vikram lander are not designed to withstand that kind of temperature. The electronics would not work and would get permanently damaged.

Hence if no connection is established in the next two weeks, ISRO will have to give up hope after that.