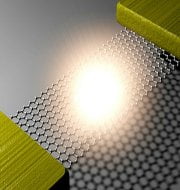 Scientists from Israel have created the world’s first ‘water-wave laser’ that emits a beam through the interaction of light and water waves.
The study conducted by team of researchers from Technion-Israel Institute of Technology led by Professor Tal Carmon.

Significance of this research

A typical laser can be created when the electrons in atoms become “excited” by energy absorbed from an outside source causing them to emit radiation in the form of laser light. However, the water-wave laser for the first time showed that water wave oscillations within a liquid device can also generate laser radiation. It also successfully demonstrated nonlinear optics and water waves, two areas of research that were previously considered unrelated to one another.

The ‘water-wave laser’ may be used in ‘lab-on-a-chip’ devices to study cell biology and test new drug therapies. It can be used in tiny sensors that combine light waves, sound and water waves. It also offers scientists a playground for studying the interaction of light and fluid at a scale smaller than the width of a human hair.