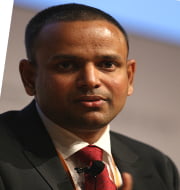 Chief Operating Officer (COO) of Indian Premier League (IPL) Sundar Raman has resigned from his position.
Board of Control for Cricket in India (BCCI) has formally accepted his resignation in the wake of the change of regime under new President Shashank Manohar and in an effort to clean up the Indian cricketing system.
It is being said that, Raman’s name had cropped up in the 2013 IPL spot- fixing scandal involving former BCCI President N Srinivasan’s son-in-law Gurunath Meiyappan and Rajasthan Royals’ then co-owner Raj Kundra.
Even Supreme Court appointed Mudgal Committee on the IPL spot- fixing scandal in its report has mentioned that Raman was decreed to have been in touch with a contact of a bookmaker eight times during IPL season. The committee in its report also had observed that Raman’s role should be further investigated.