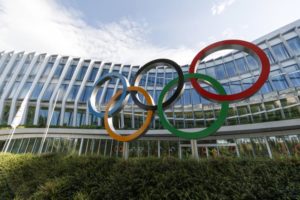 The International Olympic Committee was founded by Pierre de Coubertin, who was a great visionary and brought together entire world together in one peaceful competition.

The Olympic Games are a symbol of hope and peace for all humankind, to signify this rooftop of headquarters takes the shape of a dove which is another universal symbol of peace.

Eco friendly construction: The Olympic House has been built on site of former Olympic headquarters, and 95% of old materials were reused and recycled. The renewable energy supplied to building is provided using solar panels on roof and pumps taking water from Lake Geneva.

Signature Feature: of building is a central staircase linking together 5 Olympic rings. It is designed by architecture firm 3XN of Denmark, the energy-efficient building has won international awards for sustainability. It also brings over 500 IOC employees together under one roof.

On occasion of Olympic Day, another reason for IOC members to gather in Lausanne was to choose 2026 Winter Games host for which candidates are: Stockholm-Are (Sweden) and Milan-Cortina (Italy).

It is a non-governmental sports organisation headquartered in Lausanne, Switzerland.

The Sport’s governing body was created by Pierre de Coubertin and Demetrius Vikelas on 23 June 1894 in Paris, France.

Function: It is the authority responsible for organising modern Summer and Winter Olympic Games.