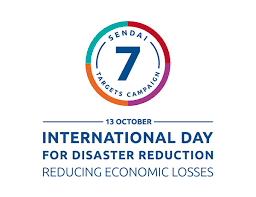 International Day for Disaster Reduction (IDDR) is observed every year on October 13 to promote a global culture of risk-awareness and disaster reduction. The observance of day seeks to encourage citizens and governments to take part in building more disaster resilient communities and nations. It also celebrates how people and communities around world are reducing their exposure to disasters and raising awareness about the importance of reining in risks that they face.  It also seeks to spread awareness about reining risks of disasters around world and also reduce exposure of people and communities to disasters. The theme of 2018 International Day for Disaster Reduction was ‘Reducing Disaster Economic Losses’. It focuses on Target C of Sendai Framework, which aims at ‘reducing disaster economic losses in relation to global GDP by 2030’.

UN General Assembly (UNGA) in 1989 had instituted International Day for Natural Disaster Reduction. to promote a global culture of risk-awareness and disaster reduction. Earlier, this day was celebrated annually on the second Wednesday of October. But in 2009, the UNGA formally designated 13 October and changed its name to International Day for Disaster Reduction by adopting Resolution 64/200.

SFDRR is an international Treaty that was approved by UN member states in March 2015 at Third World Conference on Disaster Risk Reduction held in Sendai, Japan. It is voluntary and non-binding treaty which recognizes that UN member State has primary role to reduce disaster risk. It has framework for 15-year (2015 to 2030). It calls for sharing the responsibility with other stakeholders including local government, the private sector and other stakeholders. It is successor of the Hyogo Framework for Action (2005–2015), which had been the most encompassing international accord on disaster risk reduction. 7 Global Targets of SFDRR are (refer image below)