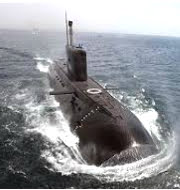 Prime Minister Narendra Modi has commissioned scorpene-class submarine INS Kalvari into the Indian Navy in Mumbai, Maharashtra. It is first of the six Scorpene-class submarines built under the strategic Project 75 built by Mazagon Dock Limited (MDL) with assistance and technology transfer from France’s DCNS. The commissioning comes days after Indian Navy observed the golden jubilee of its submarine wing.
INS Kalvari will be the first conventional submarine to be inducted into India Navy after more than 17 years. INS Sindhushastra was last inducted conventional diesel-electric submarine in July 2000 which was procured from Russia.

INS Kalvari is most modern non-nuclear stealth submarine in India Navy. ‘Kalvari’ is Malayalam word that means deep-sea tiger shark. It reflects its agility, strength and predatory prowess. The length of INS Kalvari is 67.5 metres and height of 12.3 metres and weighs 1,565-tonn and displacement capacity of 1,600 tonnes.
It is powered by two 1250 kW MAN extremely silent diesel-electric diesel engines making it very difficult to detect underwater. It boasts highly advanced Combat Management System and a sophisticated Integrated Platform Management System.
Its hull form, fin and hydroplanes are specifically designed to produce minimum underwater resistance. It has 360 battery cells (each weighing 750 kg) to power the extremely silent Permanently Magnetised Propulsion Motor. Its stealth capability is enhanced through mounting of equipment inside pressure hull on shock absorbing cradles.
Submarine Tactical Integrated Combat System (SUBTICS) suite is heart of INS Kalvari’s weapons system which processes information from sonars on-board submarine in detecting targets which can then be engaged with torpedoes or missiles.
It is armed with heavy weight torpedoes and Exocet anti-ship missiles. It can launch torpedoes both while submerged or on the surface. It has an attack-and-search periscope equipped with infrared and low light level cameras and laser range finders to spot targets on the surface of the sea.
It is designed to operate in all theatres, including the tropics and can undertake multifarious types of missions typically undertaken by any modern submarine such as anti-submarine warfare, anti-surface warfare, intelligence gathering, area surveillance, mine laying etc.