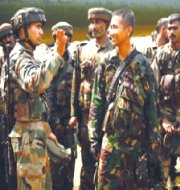 The fourth edition of the India-Indonesia Joint Training Exercise Garuda Shakti has begun at Magelang in Indonesia.
The 13 days (till 23 March) bilateral exercise aims at (i) Building and promoting positive relations between the Armies of India and Indonesia. (ii) Enhancing their abilities to undertake joint tactical level operations in a counter insurgency environment under United Nations Charter.
Key facts

Background
Indo-Indonesia Joint Training Exercise Garuda Shakti is conducted as part of military diplomacy between armies of both countries alternatively in India and Indonesia respectively.
The first edition bilateral exercise was conducted on a reciprocal basis in 2012 in India. The second edition was conducted in Indonesia in 2013 and third in India in 2014.