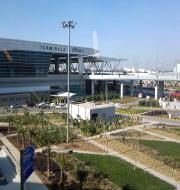 Delhi’s Indira Gandhi International Airport (IGIA) has won three international awards for 2015 year given by the Airports Council International (ACI).
In the ACI’s Airport Service Quality (ASQ) survey, IGAI has scored 4.96 on a scale of 1 to 5.
IGIA has won

ASQ is the key to understanding how to increase passenger satisfaction and improve business performance. The ACI is a trade association of the world’s airports and was founded in 1991 that aims at providing the public with a secure, safe, efficient and environmentally responsible air transport system.
IGIA is run by Delhi International Airport Limited (DIAL), a joint venture between the Airports Authority of India (AAI) and GMR Group-led consortium which include Fraport and Malaysia Airports Holdings Berhad.