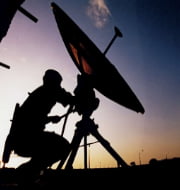 HCL Infosystems has had a long association with the Indian Defence sector. The company has closely worked with the Indian Air Force (IAF) to deploy AFCEL (Air Force Cellular Network) and Air Force Network (AFNet).
AFNet: It is the first network of its kind for Indian armed forces which interlinks major installations throughout the country on a high bandwidth network and incorporates latest traffic transportation technology in the form of Internet Protocol.