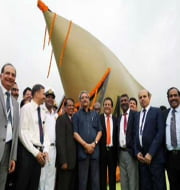 With successfully building indigenous sonar dome, India joins a select group of nations which have the capability of realising large composites structure with complex geometry, high structural rigidity and multi-functional requirements with acoustic transparency.
Sonar: It is an acronym for SOund Navigation And Ranging. It is a technique that uses sound propagation (usually underwater) to navigate, communicate with or detect objects on or under the surface of the water, such as other vessels.