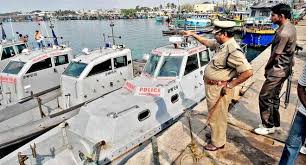 The first-of-its-kind national coastal policing academy will be created and run by multi-agency team of paramilitary and defence forces to sharpen response and skills of marine forces of multiple states which have sea lines.
It will train police personnel and other security agencies staff in maritime laws, seamanship, boat work, navigation, weapons handling, usage of sea guidance and surveillance gadgets and survival skills for long haul operations on sea or during distress times when they may get stranded in these territorial waters running up to 12 nautical miles from shore.
The Bureau of Police Research and Development (BPRD) will pilot establishment and running of academy. The Border Security Force (BSF), Indian Navy and Indian Coast Guard (ICG) will form core to run academy. The BSF will also provide security to campus. Indian Navy an ICG will help design training curriculum, provide skilled trainers and ensure access to jetties and boats for trainees of academy. Gujarat government will provide two interceptor boats stationed at Okha to academy. It will have faculty from Indian Navy, ICG and BSF.

India has 7,517-km long coastline and has 12 major ports and 187 minor or intermediate ports. India’s territorial waters end at 12 nautical miles while EEZ stretches to 200 nautical miles from the coast. At present there is no institute that trains marine or coastal police forces subjects related to coastal policing and security in professional manner.  The need for training academy was specially felt after India faced major sea-borne terror attack in November 2008 in Mumbai (financial capital of country) planned and articulated from Pakistan.