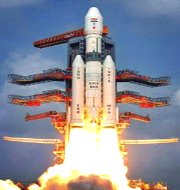 It should be noted that this is third time an Indian rocket has launched seven satellites in a single mission. In 2008, ISRO had launched 10 satellites using PSLV in one go including India’s Cartosate-2A satellite.