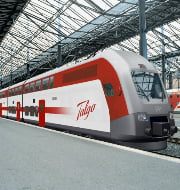 Indian Railways has conducted the first ever trial run for high-speed Talgo trains of Spain on the 90-km Bareilly-to-Moradabad stretch in Uttar Pradesh.
It was the first phase of the trail run and was conducted as part of the Indian Railways’ strategy to increase the speed of trains.
Trail Run

In the second and third phase, Indian Railway’s is going to conduct trail run on Mathura-Palwal (Rajdhani) route and Mumbai-Delhi route respectively to test the riding, safety and stability of Talgo trains.
Key features of Talgo train