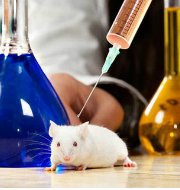 It provides guidelines on tests for drugs manufactured and marketed in India. It replaces pyrogen test carried out on rabbits and abnormal toxicity test carried out on guinea pigs and mice with tests that can be done in test tubes. These guidelines will come into effect from July 1, 2018.
The pyrogen test will be replaced by bacterial endotoxin test or monocyte activation test which can be carried out in test tubes. For abnormal toxicity test, Vaccine manufacturers can apply for waiver by getting compliance certificate from National Control Laboratory.

People for the Ethical Treatment of Animals (PETA) India was pushing for doing away with cruel methods of testing on animals for the past several years. It had written to IPC in 2015 with several suggestions. These suggestions were discussed in a meeting of expert committee on vaccine standards that was held in 2016 and few of them have finally approved by IPC.
Pyrogen test is carried out to check impurity or substance that can cause adverse side-effects. For the test, drug is injected into rabbit and animal is closely observed for feverish symptoms. The abnormal toxicity test is carried out to check potential hazardous biological contamination in vaccine formulations. This batch test is done before product is approved for marketing. In this, mice or guinea pigs are injected with vaccine. The scientists observe if there is death of any animal.

IPC is an autonomous institution of Ministry of Health and Family Welfare to set standards of drugs in country. Its basic function is to update regularly standards of drugs commonly required for treatment of diseases prevailing in the region. These set of standards are published under title Indian Pharmacopoeia (IP) similar to British Pharmacopoeia and United States Pharmacopeia. IPC publishes official documents for improving Quality of Medicines by way of adding new and updating existing monographs in form of IP. It also promotes rational use of generic medicines by publishing National Formulary of India. IPC was established by executive orders in 1945 according to Indian Drugs and Cosmetics Act, 1940. It is headquartered in Ghaziabad, Uttar Pradesh.