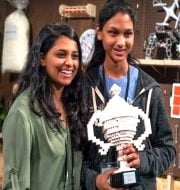 Google Science Fair: It is an annual programme of the search engine giant Google for any budding scientists between the ages of 13 to 18 who are invited something to solve the world’s biggest challenges using science and technology.