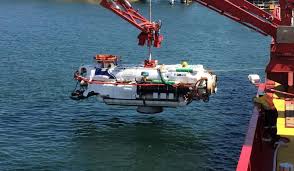 The vehicles are developed by Scotland-based JFD, a part of James Fisher and Sons Plc In March, 2016. JFD had won the contract of 193 million pounds for supply of two sets of non-tethered DSRV and 25 years of maintenance.
These DSRVs are third-generation system, considered to be most advanced system currently in operation globally. It is capable of undertaking rescue from a disabled submarine up to 650 metres depth. It is operated by a crew of three, can rescue 14 personnel from disabled submarine at time.
DSRVs complete with associated kit in fly away configuration, can be crucial in quickly locating submarines through vast expanse of sea and can be mobilised by air and water for rapid rescue.  It can be deployed at short notice for providing assistance to submarines in distress.
Indian Navy two DSRVs will be based on West and East Coast of India respectively. The first DSRV will be operated and deployed by crew of Indian Navy’s newly formed Submarine Rescue Unit (West) from its base in Mumbai. The second DSRV is out for delivery and is expected to reach Visakhapatnam soon. It will be operational by April 2019.

Indian Navy currently operates 16 submarines of Sindhughosh, Shishumar and Kalvari classes as well as nuclear powered submarines. The operating medium and nature of operations undertaken by submarines expose them to high degree of inherent risk. In such eventuality, traditional methods of search and rescue at sea are ineffective for  disabled submarine in deep waters. To overcome this capability gap Indian Navy has acquired third generation, advanced Submarine Rescue System considering of Non-tethered Deep Submergence Rescue Vehicle (DSRV) and its associated equipment.

The Indian and the Indonesian navies held the PASSEX military exercise in the Arabian sea on Februar...

The Supreme Court have put a stay on the dismantling of the INS Viraat that was decommissioned recen...

Exercise Kavach: To be held under Andaman and Nicobar Command

The Indian Army is to conduct a large scale joint military exercise Kavach in the Andaman Sea and Ba...