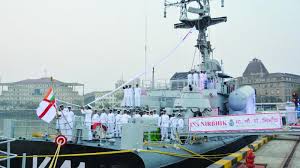 Indian Navy has decommissioned INS Nirbhik and INS Nirghat warships at Naval Dockyard, Mumbai (Maharashtra), after a glorious 30 and 28 years respectively in the service of the nation.
During their glorious service over almost three decades, these ships had participated in numerous operations including Operations Parakram and Vijay.

INS Nirbhik and INS Nirghat in their new avatars were commissioned at Poti in erstwhile USSR (now in Russia) in December 1987 and December 1989 respectively. These ships belonged to Killer squadron and were forward deployed off Gujarat on numerous occasions for patrolling
They had four gas turbine engines that enabled them to achieve fast speeds close to 40 Knots. Their weapon package included four Surface to Surface missile, medium range AK 176 gun and close range AK 630 in addition to small calibre guns packs a lethal punch. These ships were manned by a crew of 70 sailors and seven officers.
These ships were inheritors of proud legacy as their original avatars were flag bearers of naval offensive action on Karachi Harbour during India-Pakistan war in 1971.