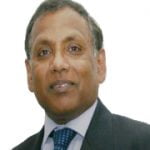 Indian journalist and Councillor Philip Abraham has been elected the Deputy Mayor of Loughton town in the United Kingdom.
Councillor Carol Davis, the newly-elected mayor presented the Deputy Mayor’s Badge to Philip Abraham.
Mr. Abraham is a journalist from Kerala and is editor of Kerala Link. He had won the election to the Loughton Town Council in 2012. He was the first person of Asian origin to be elected to Loughton Town Council
Loughton is a vibrant town in the Epping forest district of Essex and has migrant population is less than 2 per cent. The elected deputy mayor normally goes on to become the mayor for the following year.
Interesting fact: India’s former defence minister V K Krishna Menon was the first person from Kerala to become a Councillor in Britain. He was a Labour Councillor for the Borough of St Pancras from 1934 to 1939.