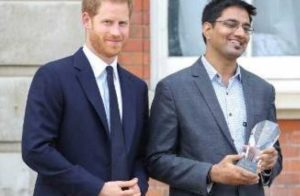 The award was presented by Prince Harry (Duke of Sussex), Youth Ambassador of Commonwealth, and Patricia Scotland, Commonwealth Secretary-General.

The inaugural Commonwealth Innovation Awards was conferred upon 15 innovators from 53 member-countries of Commonwealth.

Prize: Each of 15 winners received a trophy, certificate and prize money worth 2,000 pounds.

Nitesh Kumar Jangir: He is a Bangalore-based electronics engineer and is co-founder of Coeo Labs, a medical device company which holds a vision of preventing preventable deaths in field of emergency and critical care. Thus, he created Saans as a breathing support device to tackle avoidable deaths of premature babies from neonatal respiratory distress syndrome due to lack of immediate access to complex medical equipment. The award received will help in upscaling this device across Commonwealth countries, for use in similar conditions in regions like Africa.

It is a breathing support device used for tackling avoidable deaths of premature babies from Neonatal Respiratory Distress Syndrome (RDS).

Feature: It is world’s 1st neonatal Continuous Positive Airway Pressure (CPAP) device. It can be powered in multiple ways via direct source electricity, like with help of vehicle’s electrical supply, rechargeable battery, compressed gas, or even a manual air pumping.

Pilot use: Saans has been in circulation for past 3 months across several district hospitals of India that lack neonatal ICU facilities and also at medical colleges, has been in development for 4 years.

Cheap: It is a low-cost device, at least 3 times cheaper than any other such machine.

Significance: In countries such as India, Africa where there is inconsistent electricity supply and very limited resources at public hospitals, this neonatal breathing support equipment comes as a boon as it can be used easily without any complex training. Being user-friendly, anyone, anywhere can use this device and deliver crucial support to premature babies.

Eligible: Awards are open to Commonwealth citizens and Commonwealth countries (53 sovereign states) based organisations from public, private or even voluntary sectors. Women and young people are mainly encouraged to apply.

Selection Process: was based on impact or potential of innovations to advance one or more 17 Sustainable Development Goals (SDGs) in Commonwealth nations and some of other winners were from countries in Caribbean and Africa and from Australia and Canada.