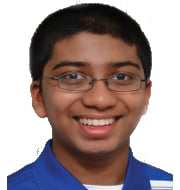 Indian American teenager from Texas Syamantak Payra (15) has won the $50,000 Intel Foundation Young Scientist Award. Payra won this prestigious award along with Kathy Lu (17).
He won the award for his work in making a low-cost electronically-aided knee brace device which allows people with weakened legs to be able to walk better.
Payra had tested his design on two people that were left partially disabled after suffering from polio. His device has allowed them to walk more naturally, and improved their mobility.
He had won this award after beating out 1,700 young scientists from 419 fairs held in 77 countries around the world.
In this edition of Young Scientist Award, there were five Indian Americans out of 22 “Best of Category” winners, each of whom received $5,000 in prize money.
Five Indian Americans

The Young Scientist Award is given out by Intel Corporation and the Society for Science and the Public (SSP). All winners were given awards at the 2016 ‘Intel International Science and Engineering Fair’ held in Arizona,US.