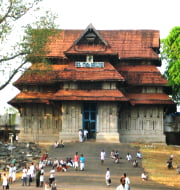 India has won the UNESCO prize ‘Award of Excellence’ 2015 for the conservation efforts of the Sree Vadakkunnathan Temple in Kerala.
The top award was given in the Asia Pacific Heritage Award for Cultural Heritage Conservation.
This award recognises the conservation effort of sacred sites and its tangible attributes with conservation techniques emphasising on architecture and construction. These scared sites employ age-old rituals and conservation techniques drawn from vastu shastra focusing on construction and architecture.
It should be noted that, UNESCO’s “Award of Merit” in Heritage Award was bestowed upon 150-year-old Sino-Portuguese former residence of a Thai aristocrat, which now has been converted into a local museum and historic inn.