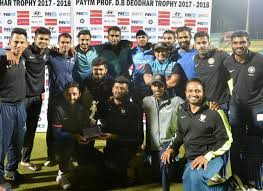 The Deodhar Trophy is a List A cricket competition in Indian domestic cricket. It is named after Prof. D. B. Deodhar (known as the Grand Old Man of Indian cricket). It is a 50-over knockout competition played on an annual basis among five zonal teams – North Zone, South Zone, East Zone, West Zone and Central Zone. It was realigned in 2015-16 season with winners of Vijay Hazare Trophy playing two teams – India A and India B – selected by the BCCI.  North Zone has won most titles i.e. for record 13 times.