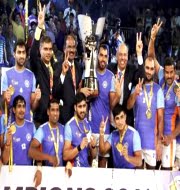 India has won the 2016 Kabaddi World Cup by defeating Iran by 38-29 score in the final match played at the Arena By TransStadia in Ahmedabad (Gujarat.
It was India’s third consecutive Kabaddi World Cup in the Standard Style version of Kabaddi. Earlier India had won in 2004 and 2007.
Captain of Indian team: Anup Kumar
Captain of Iranian team: Meraj Sheykh

It is India’s first-ever convertible stadium. It uses a globally patented technology, which converts an outdoor stadium into an indoor arena within 6 minutes at a touch of a button. It can house 14 sports, excluding cricket and has seating capacity of 20,000.