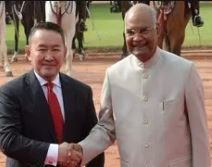 Mongolian President Khaltmaagiin Battulga is on a five-day visit to India with an aim to intensify bilateral ties between the two countries. He was received by the Union Minister Kiren Rijiju. Later he was received by President Ramnath Kovind at the Rashtrapati Bhavan and was accorded ceremonial reception.

During the talks, Mongolia conveyed its decision to join the International Solar Alliance and reiterated its support to India’s candidature for permanent membership of the UNSC.

Mongolia is predominantly a Buddhist country. Prime Minister Narendra Modi and President Battulga jointly unveiled a statue of Lord Buddha and his two disciples, installed at the historic Gandan Tegchenling Monastery in Ulaanbaatar, capital of Mongolia through a remote.

The statue of Lord Buddha in sitting posture also depicts his two disciples in which Lord Buddha is conveying the message of compassion along with peace and co-existence. The statue was installed and consecrated at the Gandan Monastery during the third edition of SAMVAAD dialogue which brought together Buddhist religious leaders, experts and scholars from different countries to deliberate on contemporary issues related to Buddhism.