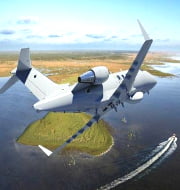 India has signed a defence deal with United States worth over $1 billion to purchase four additional Poseidon-8I (P8I) long-range maritime surveillance and anti-submarine warfare aircraft.
This deal is a follow-up order to the eight P-81 aircrafts that are already bought by India in a direct deal with Boeing’s Indian subsidiary in 2009.
The acquisition of additional four P-8I aircraft will give the Indian Navy much-needed punch to build up its naval surveillance capabilities.