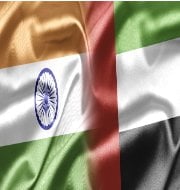 On November 3, 2020, India and UAE held the High-Level Joint Task Force on Investments. The task force was created in 2012.

The task force discussed upon the following

India and UAE recently strengthened their Defence Cooperation. This will help India achieve its target of 5 billion USD of defence exports in five years.

UAE is the 10th largest investor of India (as of 2015). When PM Modi visited UAE, UAE-India Infrastructure Fund was set up with an ambitious target of 75 billion USD to support infrastructure of India.

The UAE has signed a trade deal of 3.4 billion USD in 2019. China is the second largest trading partner of UAE. UAE is the major gateway for Chinese exports to the middle east.

US is one of the closest allies of UAE. Both the countries are close friends. The US recently brokered the historic Abraham Accord between the UAE and Israel. With this, UAE became the first major Arab state to recognize Israel. After UAE, Bahrain recognized Israel.