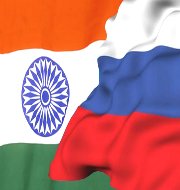 India and Russia have signed a customs and liberalize business visas agreement to boost trade between both countries to remove the hindrances and boost commerce.
This pact will help to rapid clearances of imported goods at the land and sea ports and addresses the issues related to the non-tariff barriers. Both countries also have fixed a target of US 30 billion dollars to be achieved by 2025.
This agreement will play important role proposed International North-South freight corridor (INSTC) for trade from India to Russia to central Asia through Iran.
Presently, bilateral trade between both nations is extremely low and it was just 9.51 billion dollars. In Ufa, Russia prior to BRICS ministerial meeting Prime Minister Narendra Modi and his Russian counterpart President Vladimir Putin had discussed ways to increase bilateral trade.
Both countries also had reached an agreement on setting up a Joint Study Group which will recommend contours of a Free Trade Agreement (FTA) between India and Eurasian Economic Union (EEU) comprising Russia, Kazakhstan, Belarus and Armenia.