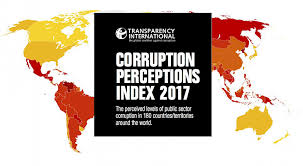 India was ranked 81st among 180 countries in Corruption Perception Index (CPI) 2017 released by NGO Transparency International. India has dropped by two ranks from 79th slot in CPI 2016. It scored 40 on the scale
CPI ranks countries on a scale of zero (highly corrupt) to 100 (very clean) based on their perceived levels of corruption in the public sector. The index is compiled by using data of World Bank, World Economic Forum (WEF) and other institutions,

New Zealand and Denmark were ranked as cleanest countries in 2017 CPI list as in 2016, with scores of 89 and 88, respectively. Syria, South Sudan and Somalia were ranked as most corrupt countries with scores of 14, 12 and 9, respectively. Countries with poorest protection for press and (NGOs were placed at the lowest ranks on the index.
CPI characterised India as among worst regional offenders in Asia Pacific region on grounds of journalists, activists, opposition leaders and even staff of law enforcement or watchdog agencies being threatened or even murdered. India was clubbed with Philippines and Maldives. Pakistan with score of 32 and China with 41 were perceived more corrupt than India.
Among BRICS, Russia is most corrupt than other three counties with a score of 29. South Africa ranked at 71st, after it dropped by seven places compared to CPI 2016.