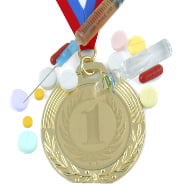 India was ranked third for the third year in a row in a doping violation report published by the World Anti-Doping Agency (WADA) for 2015.
In 2015, 117 Indian athletes were punished after testing positive for banned substances. India followed the Russian Federation (176) and Italy (129), the same position as in the reports of 2013 and 2014.

The chart was prepared by WADA after compiling information of analytical findings and sanctions rendered till January 31, 2017 by various accredited anti-doping bodies. It was the first set of Anti-Doping Rule Violation statistics under the revised WADA Code and third such report in its history since 2013.