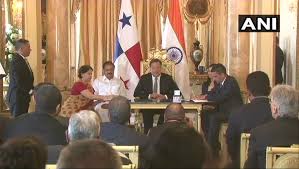 India and Panama have signed two agreements on exemption of Visas for holders of Diplomatic and Official Passports and in the field of Agriculture. These agreements were signed in the presence of Vice President M Venkaiah Naidu and President of Panama Juan Carlos Varela Rodrigues in Panama city. It was second leg of Vice President M Venkaiah Naidu’s his first official foreign visit to three countries Guatemala, Panama and Peru to strengthen India’s relations with them.

India and Panama always had cordial relations. These ties are based on our common values and shared commitment to democracy, pluralism, multi-culturalism, and the rule of law. During Vice President M Venkaiah Naidu’s visit, both countries resolve to combat terrorism in all its forms and manifestations. India will set up two centres for Biodiversity and Innovation in Panama worth US $10 million and US $15 million each. Both countries have agreed to boost cooperation in key areas by strengthening cooperation in tax information, economic cooperation, air services, traditional medicines, culture and space.