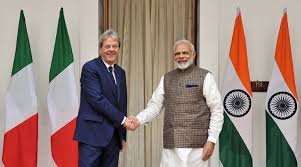 India and Italy have signed six agreements to boost cooperation in the fields of railways safety, energy and promoting mutual investments, among others
They were signed after detailed talks between Prime Minister Narendra Modi and his Italian counterpart Paolo Gentiloni. He is first prime ministerial trip from Italy to visit India in more than a decade.

Both leaders discussed wide-ranging issues, including the emerging security challenges facing the world such as terrorism and cybercrimes, while agreed to enhance cooperation to counter them. They vowed to fight violent extremism in all forms and manifestations and agreed to strengthen consultation mechanism through regular exchange of assessments and information, training and capacity building programmes in sphere of counter-terrorism. They also resolved to enhance cooperation to take decisive and concerted actions against al-Qaeda and ISIS. They also called upon all the UN member countries to designate terrorist entities in line with the relevant UNSC Resolutions.

India and Italy are ancient civilizations and have known, interacted and traded with each other for over 2000 years. Political relations between India and Italy were established in 1947. The two countries enjoy cordial relationship.
Italy is India’s fifth largest trading partner in EU with a bilateral trade of US $8.79 billion in 2016-17. India’s exports to Italy were at US $4.90 billion, while its imports were at US $3.89 billion, a trade imbalance of about US $1 billion in favour of India. In the first four months of fiscal 2017-18, bilateral trade had reached US $3.22 billion.
India-Italy diplomatic ties took a hit after two Italian marines — Salvatore Girone and Latorre Massimiliano on board ship named Enrica Lexie, were arrested for allegedly killing two Indian fishermen off coast of Kerala in 2012.
Italy has supported India’s candidature at Missile Technology Control Regime (MTCR) in 2016 and at FATF (Financial Action Task Force). Italy’s support is also crucial for India’s bid for Nuclear Suppliers Group (NSG) membership and EU-India FTA (Free Trade Agreement).