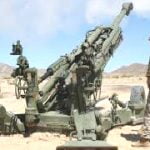 India has signed government-to-government (G2G) deal with the United States (US) to buy 145 M-777 Ultra-Light Howitzers worth $750 million under the Foreign Military Sales programme.
The deal was signed at the two-day meeting of the 15th India-US Military Cooperation Group (MCG) held in New Delhi.
This is the first defence deal signed by India for purchasing artillery guns since the Bofors scandal in 1980s. It was recently cleared by the Cabinet Committee on Security (CCS) headed by Prime Minister Narendra Modi.
Under this deal

India-US MCG: It is a bilateral forum established to progress Defence Cooperation between HQ Integrated Defence Staff (India) and US Pacific Command at strategic and operational levels.

It is manufactured by BAE Systems’ Global Combat Systems division. It is smaller and lighter.  It weighs 4,100 kg and can be easily transported by helicopters. It has effective firing range of 24 km.
Comment
M777 Ultra-Light Howitzers artillery guns induction will give Indian defence forces a much needed operational advantage and an access to state of art technology. These guns will be deployed in high-altitude areas in Arunachal Pradesh and Ladakh, bordering China.