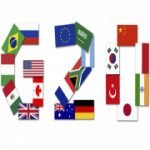 India will host G20 Summit In 2022, when it celebrates its 75th year of Independence. It was announced by Prime Minister Narendra Modi during ongoing G20 meet of international grouping in Buenos Aires, capital of Argentina. This comes after  Italy accepted India’s formal request to host this summit in 2021 as earlier it was going to host it in 2022. During the Buenos Aires G20 meet, India presented a nine-point agenda to the G20 countries calling for strong and active cooperation among them to comprehensively deal with fugitive economic offenders.

It is premier forum for international economic cooperation and decision-making for governments and central bank governors from 20 major economies to focus on economic issues and other important development challenges.
It comprises of total 19 countries plus European Union (EU), representing 85% of global GDP, 80% of international trade, 65% of world’s population. Its members include Australia, Argentina, Brazil, Canada, China, India, France, Germany, Indonesia, Italy, Japan, South Korea, Mexico, Saudi Arabia, Russia, Turkey, South Africa, UK, US and EU.
It was started in 1999 as meeting of Finance Ministers and Central Bank Governors in the aftermath of the South-east Asian (Tiger economies) financial crisis. It was established for studying, reviewing, and promoting high-level discussion of policy issues pertaining to the promotion of international financial stability.
In 2008, the first G20 Leaders’ Summit was held in Washington DC, US. Prior to this, it was merely forum for meeting of Finance Ministers and Central Bank Governors. The group has played key role in responding to the global financial crisis.