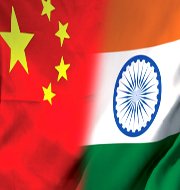 India and China have signed agreement on internal security cooperation. It is first such agreement to be signed between the two countries. The agreement was signed by Union Home Minister Rajnath Singh and China’s State Councilor and Minister of Public Security Zhao Kezhi in New Delhi.

The agreement on internal security cooperation aims to strengthen and consolidate assistance in counter-terrorism, organised crimes, drug control, human trafficking and exchange of information, marking a new beginning between the two countries. It covers areas of intelligence sharing, exchange programme, sharing of best practices, cooperation in disaster mitigation besides others.

The agreement followed first high-level meeting on bilateral security cooperation co-chaired by Rajnath Singh and Zhao. During this meeting, two sides discussed counter-terrorism cooperation and welcomed increased cooperation between the two countries in the area of security during the meeting.
Zhao was heading delegation of over 30 Chinese diplomats during his visit to India from October 21 to 25, 2018. As China’s State Councilor and Minister of Public Security, responsible for day-to-day law enforcement in China and commands about 19 lakh personnel. While, India’s Rajnath Singh is the head of eight central armed police forces with a combined strength of about 10 lakh personnel.