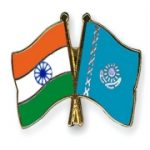 According to External Affairs Minister (EAM), S Jaishankar, India has agreed on USD 200 million Line of Credit support for the developmental projects in Kyrgyzstan.

Diplomatic relations between India and Kyrgyz Republic Relations have become more significant in the 21st century. Initially in 1990s, it has remained passive. Both the countries seek to develop an extensive commercial and strategic partnership in Central Asia region. India recognised independence of Kazakhstan from the Soviet Union after Soviet Union got dissolved in 1992. In recent years, India is working towards increasing its commerce and strategic ties with Kazakhstan. Kazakhstan is significant because it occupies a major territory in Central Asia comprising of extensive oil, natural gas and mineral reserves. India seeks to expand its ties in the backdrop of increasing economic & strategic influence of China.

India is working for the development of nuclear energy industry as a clean alternative for satisfying its huge energy needs. Kazakhstan has huge uranium required for nuclear energy. Thus, India is developing a strong relationship with Kazakhstan.