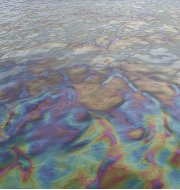 Researchers from Indian Institute of Science Education and Research (IISER) Thiruvananthapuram have developed a compound named gelator to scoop out marine oil spills.
They had produced gelators using glucose as a starting material and through several other chemical reactions.
How it works?

What are the advantages?