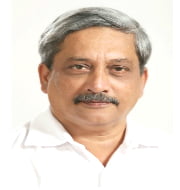 The erstwhile IDSA is a think tank for research in international relations and Security issues. It also houses a training academy for civilian and military officers of the government.