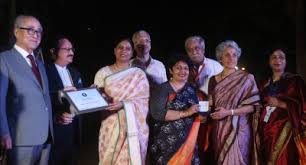 The Indian Council of Medical Research (ICMR) was awarded 2017 Kochon Prize for building tradition of excellence in Tuberculosis (TB) research and development. It had emerged winner from among 18 nominations.
It was awarded for establishing India TB Research Consortium to accelerate R&D efforts in the country. The consortium is working with public and private institutes to guide country’s research efforts towards development of point-of-care diagnostics, shorter treatment regimens and effective vaccine for TB.

The ICMR is India’s apex scientific body for the formulation, coordination and promotion of biomedical research. It was established in 1911 as Indian Research Fund Association (IRFA) making it one of the oldest and largest medical research bodies in the world. The ICMR functions under the Department of Health Research, Union Ministry of Health and Family Welfare. It is headquartered in New Delhi.
ICMR’s Governing Body is presided over by Union Health Minister. It is assisted in scientific and technical matters by Scientific Advisory Board comprising eminent experts in different biomedical disciplines. Its research priorities coincide with National health priorities such as control and management of communicable diseases, fertility control, maternal and child health, control of nutritional disorders, research on major non-communicable diseases like cancer, cardiovascular diseases, blindness, diabetes and mental health research and drug research (including traditional remedies) and developing alternative strategies for health care delivery,

The Kochon Prize is awarded annually by Stop TB Partnership to individuals and organizations that have made significant contribution to combating the disease. The prize is endowed by Kochon Foundation, a non-profit foundation registered in South Korea. It consists of prize of US $65,000 award.
The prize was established in 2006 in honour of late Chairman Chong-Kun Lee (left), founder of Chong Kun Dang Pharmaceutical Corporation and Kochon Foundation. He was committed throughout his career to improve access to low-cost lifesaving antibiotics and anti-TB drugs.