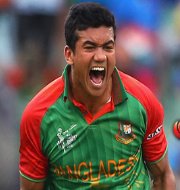 The International Cricket Council (ICC) has suspended Bangladesh bowlers Taskin Ahmed and Arafat Sunny for bowling with an illegal action with an immediate effect.
They were suspended after independent assessments have found that their bowling actions of is illegal. Their international suspensions will also be recognized and enforced by all the members for domestic cricket events played in their own jurisdiction.
The assessments were performed at the ICC-accredited testing centre at the Sri Ramachandra University in Chennai.
In the assessment it was found that Sunny’s (left-arm spinner) elbow extension for a majority of his deliveries exceeded the 15 degrees level of tolerance permitted under the ICC Regulations. Taskin’s (pace spearhead) most of the deliveries were also found illegal.
Other Bangladeshi bowlers who were suspended: Left-arm spinner Abdur Razzak (November 2008 to March 2009, Spinner Sohag Gazi (2014 to February 2015).