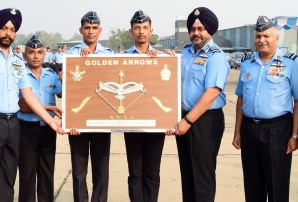 First batch of Rafale jets are scheduled to be formally handed over to Defence Minister Rajnath Singh on 8 October in France and are set to arrive in India in May 2020.

IAF also plans to resurrect another former MiG-21 squadron, 101 Squadron also called as ‘Falcons’, which too was ‘number-plated’ (removed from active list, and its identity mothballed for future use) and were later decommissioned as part of IAF’s long-term plan to phase decades-old aircraft out of service. 101 Squadron, the 2nd Rafale squadron, will be based in Hashimara to operate on Sino-Indian front.

The resurrected17 Squadron aka Golden Arrows will be the first IAF squadron to be equipped with state of the art Rafale fighter aircraft. Rafale is an extremely capable, 4th generation, multirole aircraft with advanced weapons.

This Rafale squadron will be based in Ambala and operationally committed to India-Pakistan frontier.

Combat history of 17 Squadron: It was formed at Ambala in 1951 and was equipped with Harvard-II B fighter. By November 1955, the Squadron converted fully to De Havilland Vampire and by 1957 Hawker Hunter fighter aircraft were flown by ‘Golden Arrows’, which it flew with distinction in 1971 war (Bangladesh Liberation War), winning numerous gallantry awards.

In December 1961, Golden Arrows actively participated in Goa Liberation Campaign and in 1965 operations as a reserve force.

In 1975, the Squadron converted to Mig-21 M and on November 1988, the Squadron was presented ‘Colours’ by then President of India R Venkataraman.

Under the command of then Wing Commander and current ACM BS Dhanoa, the squadron distinguished itself in Operation ‘Safed Sagar’ (or 1999 kargil conflict).

On October 22, 2020, the Indian Navy operationalised the first batch of women pilots on Dornier Airc...

On September 23, 2020, the Comptroller and Auditor General submitted its report on Defence Ministry ...