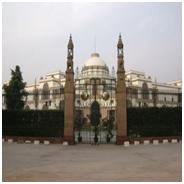 According to a report published by a UK-Based firm, Hyderabad airport has been ranked 16th among the “Top 20 Most Surveilled Cities globally.” This has been intimated by the office of the Director-General of Hyderabad Police.

According to the Hyderabad Police, the firm based in the UK, Comparitech, has surveyed a number of cities and Hyderabad with its 3 lakh CCTV cameras has figured 16th in that list. The city has a total population of over 1 crore. In the survey, Taiyuan in China has been ranked first with 465255 CCTV cameras. Hyderabad has been the topmost ranked Indian city in the report.

This implies the citizens can be assured of the safety of life in the city and also the public participation in achieving this feat is to be mentioned here. They helped in the Nenu Saitham Program to install more than three lakh cameras. The police department is planning to increase this number to ten lakh in the next four years. Police-public coordination has ensured this feat for the city.