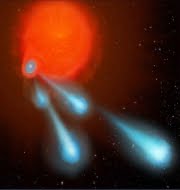 NASA’s Hubble Space Telescope (HST) has detected Great Balls of Fire (GBF), a mysterious super-hot blobs of gas seen near a dying star.
The plasma gas balls were observed near a red giant called V Hydrae, about 1,200 light years away from Earth. Red giants are dying stars that are nearing the end of their fuel supplies and have begun to expand and puff up.
Key Facts